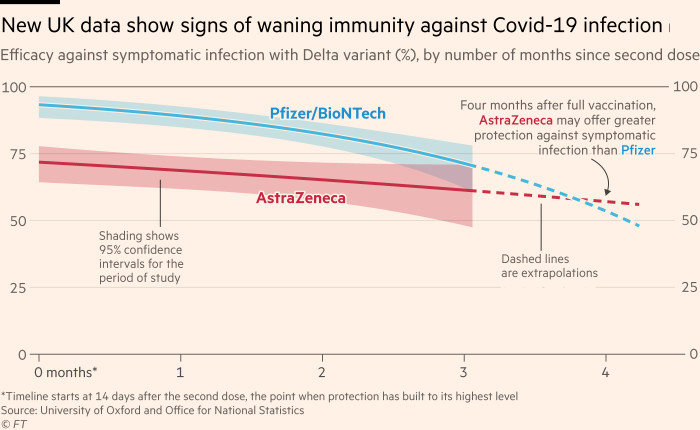 As debates about booster shots heat up, what’s known about the duration of vaccine-based immunity is still evolving.

Six months ago, Miles Davenport and his colleagues made a bold prediction. On the basis of published results from vaccine trials and other data sources, they estimated that people immunized against COVID-19 would lose approximately half of their defensive antibodies every 108 days or so. As a result, vaccines that initially offered, say, 90% protection against mild cases of disease might only be 70% effective after 6 or 7 months1.

“It felt a little bit out on a limb at the time,” says Davenport, a computational immunologist at the University of New South Wales in Sydney, Australia. But on the whole, his group’s predictions have come true.

Immunological studies have documented a steady decline of antibody levels among vaccinated individuals2. Long-term follow-up of vaccine trial participants has revealed a growing risk of breakthrough infection3. And health-care records from countries such as Israel, the United Kingdom and elsewhere all show that COVID-19 vaccines are losing their strength, at least when it comes to keeping a lid on transmissible disease.

That’s without accounting for the Delta threat either — and it’s clear that vaccine–induced antibodies do a worse job at recognizing SARS-CoV-2 variants compared with the ancestral strain of the virus4. What remains unclear, however, is to what degree the immune system’s safeguards that protect vaccinated people against severe disease, hospitalization and death might be fading as well. “That,” says Davenport, “is the million-dollar question at the moment.”

As discussions over booster programmes heat up — with leading global-health authorities coming out publicly against the idea this week, UK officials endorsing boosters for the over-50s, and advisers to US regulators meeting on 17 September to discuss the issue — Nature takes stock of the data informing the debate.

How is vaccine-induced immunity holding up?

“Things wane,” says Nicole Doria-Rose, an immunologist at the US National Institute of Allergy and Infectious Diseases in Bethesda, Maryland. But not all things wane equally.

‘Neutralizing’ antibodies that can intercept viruses before they infiltrate cells might not have much staying power. Levels of these molecules typically shoot up after vaccination, then quickly taper off months later. “That’s how vaccines work,” Doria-Rose says.

But cellular immune responses are longer lasting — and as Jennifer Gommerman, an immunologist at the University of Toronto in Canada, explains: “Cellular immunity is what’s going to protect you from disease.” Memory B cells, which can rapidly deploy more antibodies in the event of re-exposure to the virus, tend to stick around, and so do T cells, which can attack already-infected cells. Both provide an added measure of protection should SARS-CoV-2 sneak past the body’s first line of defence.

In one of the only long-term studies to consider these three planks of the immune system simultaneously — antibodies, B cells and T cells — researchers found that vaccination spurred durable cellular immunity5. Memory B cells continued to grow in numbers for at least six months, and got better at fighting the virus over time. T-cell counts remained relatively stable, dipping only slightly over the duration of the study period.

“So, you have this reserve,” says John Wherry, an immunologist at the University of Pennsylvania Perelman School of Medicine in Philadelphia, who led the study. “Circulating antibodies may be declining, but your immune system is capable of jumping into action once again.”

How can immune memory actually be getting stronger?

Research from immunologist Ali Ellebedy, at Washington University School of Medicine in St Louis, Missouri, helps to explain the vigour of the memory-B-cell response. His group took samples from the lymph nodes of vaccinated individuals and found tiny B-cell finishing schools — called germinal centres — that were churning out ever more potent immune cells as time went on6.

B cells in these structures randomly mutate their genes to create entire new sets of antibodies. Those cells that produce the best antibody repertoires eventually win out through an evolutionary process that augments the immune system’s ability to fight off Delta and other SARS-CoV-2 variants of concern.

Ellebedy and his colleagues initially described the persistence of these germinal centres for 15 weeks post-immunization with an RNA-based jab — longer than anyone had ever seen before with older-technology vaccines for other ailments. Now, the researchers have unpublished data, following the germinal centres for up to six months. “The training camp is still going,” Ellebedy says. “It’s amazing.”

Should that immune memory give durable protection against severe disease?

For the most part, it should. But, says Theodora Hatziioannou, a virologist at the Rockefeller University in New York City, “if protection from disease relies at any level on circulating neutralizing antibodies”—and those molecules are clearly on the decline—“then, yes, the longer out you are from natural infection or from vaccination the worse you will be”.

Real-world data from diagnostic-testing records and hospital databases suggest that this might be the case. In Israel, for example, elderly people who got their shots at the beginning of the year seemed to have almost double the risk of severe illness during a July outbreak compared with similar individuals who were immunized more recently7. As researchers reported this week, older individuals given a third dose of vaccine were less likely to become infected and much less likely to develop severe disease than those who had not received the boosters8.

To Eran Segal, a computational biologist at the Weizmann Institute of Science in Rehovot, Israel, who advises the Israeli government on COVID-19 issues, the implications are clear-cut. “There’s compelling evidence that the third dose increases protection dramatically.”

But as University of Pennsylvania biostatistician Jeffrey Morris points out, inferences made from observational studies of this kind should be viewed with a critical eye. People going about their everyday lives are not clinical-trial participants. They are not randomized to account for behavioural and demographic differences. And although statistical modelling can help to correct for some of these variables, it’s impossible to account for all potential confounding factors.

“The bottom line,” Morris says, “is we need careful modelling and we need really thorough data to deconvolve all these things.”

What about other countries besides Israel?

Preliminary data from the United Kingdom and Qatar would seem to confirm the Israeli experience. Researchers at Public Health England posted a pre-print this week detailing a modest but appreciable dip in vaccine effectiveness against hospital admission and death. This occurred about 20 weeks out from inoculation for recipients both of the mRNA vaccine from Pfizer-BioNTech and the viral vector vaccine from the AstraZeneca—although the effect was most pronounced for older individuals and those with underlying health conditions. Among the elderly, there was also some indication that spacing out the initial two doses of vaccine promoted more durable protective immunity.

Meanwhile in Qatar Laith Abu-Raddad and his colleagues described last month how the vaccine from Pfizer–BioNTech had provided consistently high protection against critical illness for up to six months post-immunization. Vaccine effectiveness against mild or symptom-free infections has declined gradually, as expected. But at the time that he posted a preprint online, on 27 August9, Abu-Raddad, an infectious-disease epidemiologist at Weill Cornell Medicine-Qatar in Doha, was unsure about the need for booster shots.

Then, he says, he saw the data from seven months post-immunization. Although the results are preliminary, the vaccine’s ability to ward off hospitalization and death seems to drop off. “The data now forced a change in thinking,” says Abu-Raddad. (A comparable study from the United States has so far reported data only on waning protection against infection, not severe disease)10.

Still, globally, there is as yet no indication that the rates of severe illness among the vaccinated are spiking in any appreciable way. “The vaccines are really designed to prevent disease,” says Julie McElrath, an infectious-disease specialist at the Fred Hutchinson Cancer Research Center in Seattle, Washington. “That is still holding up.”

Even if most vaccinated individuals are not getting really sick, are there other benefits to boosters?

Reducing rates of infection should help break the cycle of viral transmission, which would ultimately result in fewer cases of severe COVID-19 and death. And according to Fyodor Kondrashov, an evolutionary geneticist at the Institute of Science and Technology Austria in Klosterneuburg, it should also help keep the emergence of vaccine-resistant variants at bay.

As Kondrashov’s modelling work has shown, resistant viruses are most likely to emerge when transmission is not controlled11. Getting more people vaccinated is the single most effective intervention to keep transmission rates low, but any bump in vaccine effectiveness can help as well.

So far, no human vaccine has been completely undermined by resistance in the way that many anti-infective drugs have, says Andrew Read, who studies the evolution of infectious diseases at Pennsylvania State University in University Park. “It’s eroded their benefits,” he says, but in ways that have been fixable with tweaks in vaccine design.

That’s not to say it won’t happen with COVID-19 vaccines. “We’re on new territory here,” says Read. The Delta variant took the world by surprise. Evolution — and our immunological responses — could have more surprises in store.

But any discussion around the need for boosters cannot be had in a vacuum. In addition to considerations of immune kinetics among the immunized, there are also issues of vaccine equity and availability to factor in. And as long as vaccinated people are staying out of hospitals and morgues, then to Katrina Lythgoe, an evolutionary epidemiologist at the University of Oxford, UK, theoretical arguments around vaccine resistance are secondary. “In my view,” she says, “apart from people who are particularly vulnerable, efforts should be directed to getting people, globally, vaccinated.” 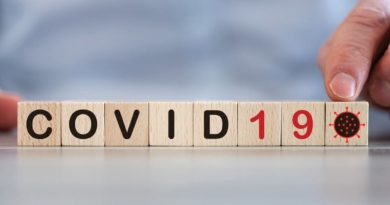 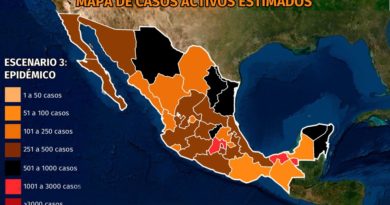 19 comentarios en "COVID vaccine immunity is waning — how much does that matter?"